Warning there is a new problem with  some LinkedIn e-mails they could be a  phishing attack, here an example. Look like you get a message form LinkedIn, but really is a hidden link to a site that will try and install malware.

To check message right click on link and see where url links to.

Technorati Tags: LinkedIn,Email security
Posted by jay f at 11:10 AM

Information taken From the Microsoft site

Beginning in October, owners of small businesses like the bike shop above can download and use Microsoft’s award-winning antimalware service Microsoft Security Essentials for free.

“Small-business owners just want to concentrate on running the business, without worrying about PCs going down,” says Jeff Smith, director of Marketing for Microsoft Security Essentials. “We talk to lots of small-business customers every day, and we understand that security is a top priority.”

The problem is, most security products for the business world were designed with larger companies in mind. From a small company’s perspective, high-end security suites are an unwieldy technology to manage — complicated, expensive and time-intensive.

“For small-business owners, just getting the business up and running is a full-time job,” Smith says.

For this reason, Microsoft is announcing that beginning in early October, Microsoft Security Essentials will become free to use for organizations with up to 10 PCs.

Originally released last year for single-PC use at home, Microsoft Security Essentials was designed as a comprehensive security solution in a lightweight package. Smith says a growing chorus of requests prompted Microsoft to extend the service to small businesses.

Over the past year, the product has won awards and certifications from a number of independent agencies, such as ICSA Labs, West Coast Labs and PC Advisor, and last January, PC Advisor named Microsoft Security Essentials to its list of the “Best Free Software.”

Says Smith: “This is a full-featured, top-tier security solution that we’re offering to small businesses for free. You don’t need a credit card. It requires no registration, no trials, no renewals. It doesn’t collect any information. It runs well on older hardware. It’s easy to use, easy to get, and it’s from a trusted source. Basically, Microsoft Security Essentials just works.”

But if the product is so successful, why offer it for free? According to Microsoft’s internal research, although 80 percent of PC owners in the U.S. say they have the most up-to-date antivirus protection, in reality only half that many actually do. Often they have signed up for free trials or subscription-based services that have lapsed. Others are just using outdated versions of security software on older hardware.

Smith says these issues become more dramatic in developing economies, where not everyone has a credit card or broadband network access to download large files.

“We want the entire Windows ecosystem to be secure,” says Smith. “By making Microsoft Security Essentials so broadly available, everyone wins. And we think small-business owners are going to be really happy with what they get. This is just what the market needed.”

I will be presenting a webinar on risk management.

Cyber Security Risk Management is concerned with the process of managing or reducing potentially harmful uncertain events due to the lack of effective cyber security.

In Part Two of this Webinar series, we will examine "Understanding Cyber Security Risk Management."  As a Security professional you need to understand the risks that affect your company.  This session will help you:

In this session we will cover the basic steps of:

How do you Identify business risks

How do you Identify business assets

A IE 9 has a new new interface increases your viewing area, and enhanced integration with the Windows 7 operating system means you can pin websites and applications directly to the taskbar and create customized Jump Lists that put the tasks you use most often just one click away. And a robust set of built-in security, privacy, and reliability technologies makes browsing safer than ever. 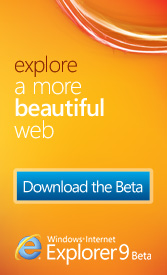 For a limited time, you can download the 10-chapter e-book Introducing Microsoft SQL Server 2008 R2, by Ross Mistry and Stacia Misner. Learn all about the powerful new database administration and business intelligence development enhancements available with this new edition of SQL Server 2008--sign up to download this free e-book offer.

This Thursday night  I will be at the;

Windows 7
Presented by Jayson Ferron
President Association of PC User Groups
Get an understanding of what's new, what improvements are in the OS and its hardware requirements. See the new User interface, Security features, and much more.


The Start menu features integrated desktop search which can help you find and launch almost anything on your PC. Just type in a word, a name, or a phrase, and Quick Search can find the right file for you. But more than that, the new start menu makes it very easy for you to navigate across all of the installed applications on your PC.

Learn new desktop tricks that make it easier to work with multiple documents.

The New York Amateur Computer Club was established in March 1975 with the mission to further education in diverse areas of personal computing. The presentations at monthly meetings cover various platform computing systems and range from in-depth technical subjects to general overviews with broad appeal.

General meetings are always held on the second Thursday of each month and start promptly at 7 PM with announcements followed by a period of Questions and Answers called Random Access in which members and visitors are encouraged to ask technical questions or ask for advice on purchasing or using software, hardware, and related issues. There is a short break before the main presentation to enable attendees to meet and greet each other and to buttonhole people to get more detailed answers to specific questions. As an alternate to the main meeting, if a few people are interested, a new- or prospective-user group meeting is held to assist beginners.

The general meetings are open without charge to the public.

We meet at New York University (NYU) in the Silver Building (the main administration building) each second Thursday of the month. The website of the club, www.nyacc.org has the latest information regarding meeting location and subject of the main presentation. Room location is always available at the main floor security desk of the building. NYU requires some form of photo ID (driver’s license, school ID, Corporate card, etc) to enter the building.

I will be speaking at 2011 Cyber Crime

On the following topics

Stay Tune for more information as the event draws closer.

Information on the conference is here at http://www.dodcybercrime.com/

UNIQUENESS OF THE CYBER CRIME CONFERENCE

This conference focuses on all aspects of computer crime and incident response including intrusion investigations, cyber crime law, digital forensics, information assurance, as well as the research, development, testing, and evaluation of digital forensic tools.

The goal is to prepare attendees for the new crimes of today and the near future. Speakers will discuss new approaches and new perspectives with the current movers and shakers in cyber crime.