Some Sites where you can get great Security Information

FBI InfaGard a connection between the Public and private sectors to share information, Chapter are all over the USA go to here  for More information

NCI Sector-based Information Sharing and Analysis Centers (ISACs) collaborate and coordinate with each other via the National Council of ISACs (NCI). Formed in 2003, the NCI today comprises 24 organizations designated by their sectors as their
Posted by jay f at 8:52 AM

Apple is in process of building an emergency patch to lock down the “root” account where a preset password does not exist.  In certain settings, the "MacOS 10.13.1 Root vulnerability" allows a missing password challenge to be fully worked around.  That allows user accounts to be reset, allowing full compromise of vulnerable systems.  This bug is serious and believe Apple with quickly rectify with an expedient “patch now” update

The hack is easy to pull off. It can be triggered through the Mac’s System Preferences application when “Users & Groups” is selected, and the lock icon on the window is clicked. After that, a new login window will appear. Anyone who types “root” as the username, leaves the password field empty, and clicks unlock (once or twice) is on their way to a new account that has system admin privileges to the computer.

Amit Serper, a security researcher with Cybereason, replicated the result and said the bug “is as serious as it gets.”  Hackers are always crafting malware that can gain greater system privileges into a computer. Now they have a new way, which can also be triggered via a Mac’s command line function. Imagine a piece of malicious code designed to attack Macs using the same flaw. Users wouldn’t even know they were compromised, Serper said.

In September of 2017 X-Force researchers from IBM discovered a new banking Trojan called IcedID. IcedID primarily targets financial institutions such as banks, payment card providers, and e-commerce sites. IcedID utilizes Emotet for delivery to target hosts.
Emotet is most commonly linked to small cybercrime organizations in Eastern Europe targeting western countries
and is known as a successor of the Dridex malware that was designed to amass and maintain botnets. Emotet itself is most often delivered by opening a macro-enabled malicious file usually delivered by spam mail. Once executed, the malware embeds itself within normal machine processes, connects home, and installs additional modular components as directed. Of the components installed consists of spamming modules, network worm modules, and data stealers.
The main known tactics and techniques of IcedID consist of common network propagation, victim monitoring, and web URL tampering. More specifically the malware leverages a local web proxy which listens to web traffic and based on what it sees can unknowingly redirect or inject parameters to the victim which causes them to browse to malicious web content controlled by the attacker instead of the original content they wanted to see. Reverse engineering of the malware revealed a PropagationThroughNetwork function, which enumerated the network propagation module that allows the malware to affect local, or remote connected end points as a way of spreading to other systems. Additionally, IcedID can query LDAP looking for other users to attack and can look for other important information to send back to the command and control server.
As a way of hiding itself IcedID utilizes a full reboot after storing start up files to the Windows %LocalAppData% folder to evade sandboxes and other defenses on victim hosts. Additionally, the malware uses SSL to communicate home and launch its attacks to avoid intrusion detection systems planted within the victim infrastructure. The malware also uses a random value as the RunKey to establish persistence on the target host. As an example, the startup file would be “C:\Users\User\AppData\Local\ewonlia rl\ewonliarl.exe” and the Runkey would be at “HKCU\Software\Microsoft\Windows\C urrentVersion\Run\ewonliarl”. IcedID listens on local network port 49157 and exfiltrates victim information of its choosing to its command and control server. Interestingly enough IcedID can still be identified by its original process IcedID which continues to run even after reboot which researchers think will likely change in the future.
Sources:
·        https://securityintelligence.co m/new-banking-trojan-icedid- discovered-by-ibm-x-force- research/
·        https://www.bleepingcompute r.com/news/security/new- icedid-banking-trojan- discovered/
·        https://threatpost.com/new- icedid-trojan-targets-us- banks/128851/
Thanks to  Peraton  and their Cyber Intelligence Program (CIP) for this information.

We are aware that a tool to scan for affected systems, called the Smart Install Exploitation Tool (SIET), has been publicly released and is available here. This tool may be being used in these attacks.
Protection
To assist customers in understanding their exposure to this issue, we have released our own scanning tool as well as preliminary Snort rules which can be used to identify affected systems and detect SIET activity.

Talos has produced a scanning utility which all users can run against their infrastructure to determine if they could be affected by abuse of the Smart Install Client Protocol. This tool can be found here.

Talos has created coverage for this issue in the form of sids 41722-41725. These rules are being provided immediately as part of the community rule set and can be downloaded here:

Cisco FirePOWER and Snort Subscriber Rule Set customers should ensure they are running the latest rule update in order to receive coverage.

Additionally, generic TFTP activity rules sid:518 and sid:1444 are available but these are not issue specific and must be explicitly enabled.

Cisco PSIRT has published a blog post related to the issue here:
https://blogs.cisco.com/security/cisco-psirt-mitigating-and-detecting-potential-abuse-of-cisco-smart-install-feature

Talos encourages all partners to quickly take steps to protect their systems in accordance with the published security guidelines.

Cisco responds quickly to attacks in progress and works with your staff to develop an incident response plan that minimizes the effect of current and future attacks.
Posted by jay f at 12:05 PM

I have started seeing this kind of attack.

Look at the email address !! Be careful on any of you emails and think before you click because the link sends you to  a bogus site.

Email ThisBlogThis!Share to TwitterShare to FacebookShare to Pinterest
Here some new Technology that i have come across

PuriFile’s software suite provides market-leading inspection and sanitization of digital files, preventing the loss of critical data and ensuring business continuity for government and commercial customers. Built to protect your inbox and halt release of sensitive information, PuriFile inherently understands your email, Microsoft Word, PowerPoint, Excel, PDF, and image files, so it can provide thorough email and file inspection and sanitization while maintaining the integrity of your network and information.


Message Scanning – Residing on a corporate exchange server, PuriFile is capable of scanning incoming and outgoing email to identify suspect content based on an organizational policy. When an individual receives an email or attempts to send email to a recipient, the PuriFile engine scans the content and attachments checking for violations. In the event a violation is detected, the recipient/sender is alerted and is able to take corrective action to accept or modify the content prior to it being received or sent to the recipient: 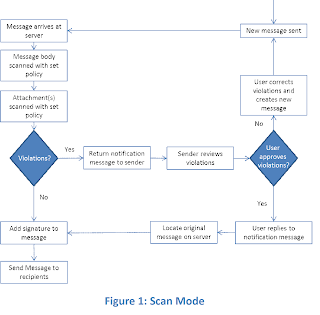 Figure 1: Scan Mode
Removing Attachments – In addition to the normal email message scanning, PuriFile is able to provide scanning and insight into content residing in email attachments. When an individual receives or completes an email and attempts to send it to the recipient, PuriFile scans the message along with any attachments and checks for violations. In the event of a violation in the attachment, the PuriFile engine replaces the content with a text file identifying the violations. A return notification is sent back to the sender along with the text file of violations.  The user will then be given an opportunity to review the violations and address as appropriate. Once all violations are addressed, the email is reprocessed for reading or sent on to the recipient:


Message Cleansing – The Message Cleansing mode is similar to Replacing Attachments mode. Rather than alerting the recipient/sender of content in violation, the Message Cleansing capability cleanses the offending content from the document. When an individual receives or completes an email and attempts to send it to the recipient, PuriFile scans the message along with any attachments and checks for violations. In the event of a violation in the attachment, the PuriFile engine removes the content from the file prior to reading or sending the offending file.

The added effect of the cleansing operation removes any malicious content, effectively halting in excess of 90% of zero-day attacks. Combined with an effective Anti-Virus/Anti-Malware solution organizations will have gained the upper hand on virulent viruses and malware.
Here is a cool offer if you interested  in testing this let me know i will forward you info to the Beta test team. They are offering   to get the software for 12 months (plus support) for doing the beta test for us.
Send email to Jferron @ Interactive Security Training.com (NO spaces)

Free Microsoft eBooks are available in PDF, EPUB and Mobi for Kindle formats.


You can go here


Also check one a week Microsoft offers deals on selected eBook Deal of the Week go here
Posted by jay f at 11:42 AM

Hyper-V virtual machines don't start after you upgrade to Windows 10 Version 1709
This is a know issue that is caused  by Antivirus programs.
Bellow is the Microsoft Solution and article.

Additionally, you see the following entry in the System log:
The Hyper-V Host Compute Service service terminated unexpectedly.  It has done this 11 time(s).

This issue occurs because Windows 10 Version 1709 enforces a policy that configures Vmcompute.exe not to allow any non-Microsoft DLL files to be loaded.

To fix this issue, check whether you have a non-Microsoft DLL file loaded in the Vmcompute.exe process. One possible cause of this issue is your antivirus software.
Posted by jay f at 10:11 AM