This is an article from Microsoft that i thought was intresting..


On Nov. 27 and 28, over 100 local India law enforcement officials from Gurgaon and Noida raided 16 call center locations identified as engaged in tech support fraud by Microsoft, resulting in 39 arrests so far. These call center operations fraudulently represented themselves as affiliated with a number of respected companies including Microsoft, Apple, Google, Dell and HP.  The New York Times reports that Senior Superintendent of Police Ajay Pal Sharma stated “the scammers had extracted money from thousands of victims, most of whom were American or Canadian.” Microsoft alone has received over 7,000 victim reports associated with these 16 locations from over 15 countries.
Anyone may receive an unwanted phone call or experience a pop-up window on your device with a “warning” that your computer has a problem requiring immediate tech support. These messages are often very convincing and use scare tactics to entice consumers into contacting a fraudulent “tech support” call center. Call center operators typically encourage the victim to provide remote access to their device for “further diagnosis” before charging the victim a fee – typically between $150 – $499 – for unnecessary tech support services. In addition to losing money, victims leave their computer vulnerable to other attacks, such as malware, during a remote access session.

This latest raid comes just six weeks after the successful raid operation by the Delhi Cyber Crime Cell of 10 call center locations resulting in the arrest of 24 individuals and the seizure of substantial evidence including call scripts, live chats, voice call recordings and customer records from tech support fraud operations. The case was also registered by the Delhi Cyber Crime Cell on the basis of a complaint by Microsoft. 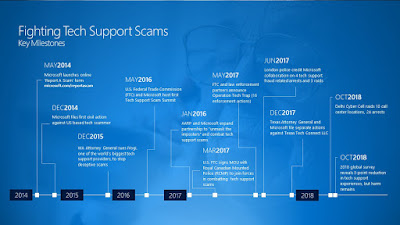 Tech support fraud operations typically involve multiple entities including those engaged in marketing, payment processing and call centers. Recent law enforcement successes in India build on a solid track record of global law enforcement taking action to combat the multiple layers of tech support fraud supported by referrals from Microsoft and other industry partners. For example, the U.S. Federal Trade Commission and multiple partners announced 16 separate civil and criminal enforcement actions against tech support fraudsters in May 2017 as part of “Operation Tech Trap.”  And, in June 2017, the City of London Police announced the arrest of four individuals engaged in computer software services fraud.
Our work to partner with law enforcement agencies in addressing this problem is driven by a combination of technology and action taken by our customers. In 2014, Microsoft launched an online “report a scam” portal to enable victims to share their tech support fraud experiences directly with our Digital Crimes Unit team. The reports have been a critical starting point for our international investigations and referrals. Our data analytics and innovation team has added additional tools to proactively hunt and pull data from approximately 150,000 suspicious pop-ups daily targeting millions of people and use machine learning to identify those related to tech support fraud.
In addition to making referrals to law enforcement based on this data, we are building what we learn about cybercriminals’ behavior into improved products and services for consumers. Microsoft has built-in protection in Windows 10 which includes more security features, safer authentication and ongoing updates delivered for the supported lifetime of a device. Windows Defender delivers comprehensive, real-time protection against software threats across email, cloud and the web. The SmartScreen filter, built into Windows, Microsoft Edge and Internet Explorer, helps protect against malicious websites and downloads, including many of those frustrating pop-up windows. People who have experienced tech support scams should know they aren’t alone, but there are steps you can take to identify and help defend yourself against criminals looking to impersonate legitimate companies. According to our recently released 2018 global survey, three out of five consumers have experienced a tech support scam in the previous 12 months. Although this reflects movement in the right direction, and a 5-point reduction since 2016, these scams persist and successfully target people across all ages and geographies. The best thing you can do to help protect yourself from fraud is to educate yourself. If you receive a notification or call from someone claiming to be from a reputable software company, here are a few key tips to keep in mind: